I just have to write this one down:

It was mentioned in one of my classes the price of tuna (I really like sashimi) and I’m wondering about the viability of in vitro fish. Already under water, so you could put the nutrients in the water, some sort of fake spine to move back and forth against the water to provide “exercise”? The fat deposition of course will be a problem. But you only need to compete with about 120$ a pound, and not with 4$ a pound.

Somebody expressed interest in reading an essay I wrote for my Philopsophy of Science class. Yes, I had a hard time not talking about “singularity” and “artificial intelligence” in it, but I figured it was for the best.

END_OF_DOCUMENT_TOKEN_TO_BE_REPLACED

Okay, so it was actually 4 months ago. But we’ll see what stuck with me.

First of all, what are you talking about Sophie?
It is an annual summit about solving world hunger, and happened to be hosted at the University of Guelph when RLS (Housing staff) decided they would send a few people like me. They had different seminars focused around themes such as the role of NGOs, role of businesses, getting involved in your community etc.

I noticed the same themes coming up a lot of the time, and made a few notes at the time.

It was an intense couple of days, with late night fancy dining on local foods. Michelle Jean gave an opening speech, which was pretty neat. Campbell unleashing their “soup”Nourish – really interesting. And it was really good – I finished my bowl, and was not really hungry by the time dinner came around. It was a simple, tomatoey flavor, that left room for a lot of different types of spices.

That said, I felt a little lost all weekend. The optimism that went around was infectious, but volunteering and awareness still seem like limited endeavors. I spoke to a man who worked for World Vision, and we agreed that one of the biggest challenges is just getting everybody on the same page and working along side each other. It was a little strange to think he worked with people committed to the same giant, admirable goal, yet facing the same silly problems as me and my staff team.

For curiousity’s sake, I tried to find an infographics around hunger. I found two, both focusing on “Wow, this is a big problem.”
One. Two.

I don’t think I’ll be attending the summit next year – I don’t think I got enough out of it compared to other people my age that seemed to be fully entrenched in it all. I’m always going to be thinking on it though, and doing my best as an individual to affect things directly around me. 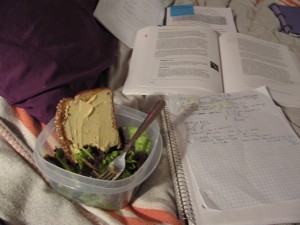 Hummus on toast, and a salad, and physics.

I bumped into this blog on being a healthy student today, and thought it had some pretty solid advice. Summer gives me time to ‘recover’ from school, read books, and reflect on the past year.

After living in residence for 2 years, both as a student with a roommate, and then again as an Resident Assistant, I’m entitled to have opinions on the matter. Maybe not on doing super well, but definitely on surviving. So, without further ado… In order of importance… 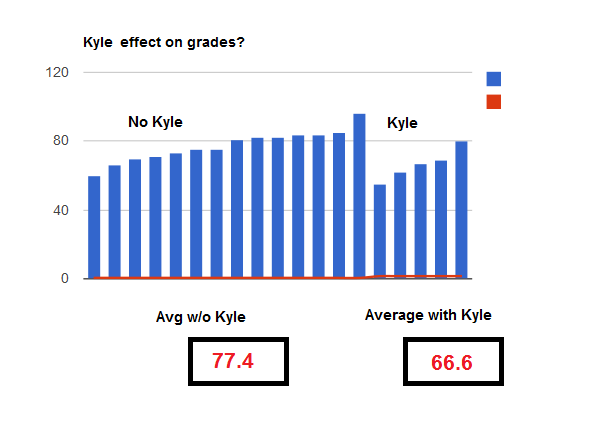 In actuality, there is no statistically significant "Kyle effect".

Learn how you study. Be honest about how and where you get stuff done. Oh, and don’t blame other people.

I’ve been bumbling around the internet in search of awesome things to do this summer, and I bumbled into this YourViews, which is a UBC website with research surveys about dilemmas and public opinion on things such as cows and robots.

I had a laugh – the robot one had a lot of joke answers – I feel like somebody asked a class to answer it. But the content itself was pretty interesting and made me think a bit. I even went searching for a word I had forgotten – “ersatz” (adj. fake but less of a negative connotation).

Oh, and in other news, here is Michael Pawlyn doing a TEDtalk about some pretty cool stuff. Those greenhouses! If Paul Atreides could see this, he’d cry. Actually, I’m not sure, I only read the first dune book.

This reminds me of something that struck me pretty deep before I got out to Guelph:

The fact of the matter is that we now understand lots of these things in ways that were inconceivable 50 years ago. And now we could begin to talk about things that 50 years ago people could not have dreamt of. When I took this course, and I did take it in 1961, we didn’t know about 80% of what we now know.

I just got “101 Theory Drive” by Terry McDermott in the mail from my Dad, and somehow I’m nearly halfway through despite having a heap of books (mostly on aging) to go through. It’s a similar book to that of “Love in Goon Park” as it focuses on one scientist (Primary Investigator – a pretty cool title if I may say so) who is the antihero of the book. I say antihero because it seems like chain smoking, not sleeping and being a rebel seems to be a theme.

Grand Unified Thought of the Day: If you don’t have a way of getting the information you need – find one. “When you have a hammer, everything starts to look like a nail.” Don’t be limited by your current toolset – if you need something else to do a job right, go get it, or make it yourself. Richard Hamming’s words have stuck with me for awhile, though he’s got so many I occasionally go back and read through the whole lecture (Ctrl+f “tools” to find his thoughts on the matter).

It appears to a consistent thing that furthering our “tools” (technologies we utilize in the pursuit of understanding) is one of the biggest contributions to science one can make. In McDermott’s book, Gary Lynch’s lab what is called the slice technique to make the most of the rat brains they had. Without PCR, faster computers, calorimeters, etc etc, where would we be? Not as far as we are today.

That reminds me, another thing I keep stumbling across is the importance of doing “important work”. But another day.

In other news, I watched through Jamie Oliver’s “Food Revolution”. It was interesting, but it was hard to see past the “for TV” characterizations of the people involved, with tension-filled moments courtesy of artful editing. Motivating people to want to change things appeared to the hardest part. It’s a little bit funny that T.V. is the original reward (the second being computers/the internet) for sedentary behavior, but I guess if you’re going to preach healthy lifestyles, the best way to hit the target audience is T.V.

Some Thoughts on Meat

I happen to eat meat and consume animal products. Been thinking about it a lot.

You are actually an animal being raised by another animal on a higher trophic level for meat – you don’t know this. Your death is painless. Are you okay with being eaten? Would you be okay eating an animal raised as such?

I am comfortable with this. Some people are not. Preferably, and very deeply, I want these animals to lead good (think five freedoms) and happy animal lives. It’s kind of strange that this ideal is now a luxury – and a big of indication that things have gone too far.

In-Vitro Meat
Worth investigating. The efficiency with which ruminants convert grass to protein is unlikely to be replaced any time soon, not to mention the cultural ties and emotional connection to raising animals for food. There is a demand though, and even I’m curious. Given the way a lot of meat is prepared today (You know the stuff I am talking about), I’m pretty sure would not differ using an imperfect in-vitro substitute.

Mechanically Separated Meat
I only found out about this today. My initial impression – repulsion at the “And then we mixed the bits of 1000 different animals together” thing, because we know that stuff leads to food-safety problems. But also admiration for aspiration to use absolutely everything, the same feeling I get from baby carrots. Repulsion and admiration.

Bumped into this video. Had a laugh. I’m not sure what I should take away from those kids’ enthusiasm for chicken nuggets. Jamie Oliver takes it as a cautionary tale of brainwashing. I’m sure familiarity had a lot to do with it, but also the unavailability of other food in that particular situation. I’d be curious to see more of the series.

Where I Come From

You can tell I am an old soul by my Dad's stolen Tilley hat.

I’ve always wanted to work with animals. I grew up in Vancouver (in Strathcona, a very old neighbourhood), and while I would joke about a pony for Christmas, I was happy to watch the squirrels and crows. Our co-op had a big backyard, and plenty of cats, and thanks to the garden and my Mum, I know a bunch about plants. It makes me really happy to be able to introduce somebody new to the joy of picking and sucking the nectar out of nasturtiums. My music award money went towards Country Life (new ed. called “Home Farm”) by Paul Heiney which had lots of pictures and I read cover to cover repeatedly and avidly. I could talk for hours about what I wanted to have on my farm – Chickens that would have movable pens, a small flock of Angora goats for their fibre who would also help me keep my orchard tidy, and of course lots and lots of bean vines near the house. For starters.
END_OF_DOCUMENT_TOKEN_TO_BE_REPLACED